Before, DURING, and after

by Debra Baida
before and after, books, home library, office organizing, room makeover
Comments are off

I know this sounds harsh and will rub many people the wrong way but it’s a truth: I hate before and after photos. Why? They are kind of boring and formulaic. They show someone is capable of cleaning up and making things look nice. Absent are context, process, and transformative learning moments for clients that often occur between points A and B.

To be clear, ninety-five percent of the work I do is done with and not for my clients. Getting organized and being organized looks and means something different for each of them, and the beginning and end looks incredibly different from one to the next. For the vast majority, it’s not about making every nook and cranny of their home photo shoot-ready for a magazine spread. The most powerful and lasting changes are more invisible and internal.

I do take photos while working and always ask permission; however, I’m drawn to capturing the more offbeat in between moments. Documenting from beginning to end is seldom a priority. There are always exceptions, and that’s what this post is about.

In correspondence prior to beginning the project that follows, the client’s spouse mentioned that it might make a good before/after. It’s common for clients to get excited and start an ambitious project only to become overwhelmed and let the momentum fizzle while defeat takes over. I took a few photos in the beginning just in case. I’m glad I did. The results surpassed expectations. 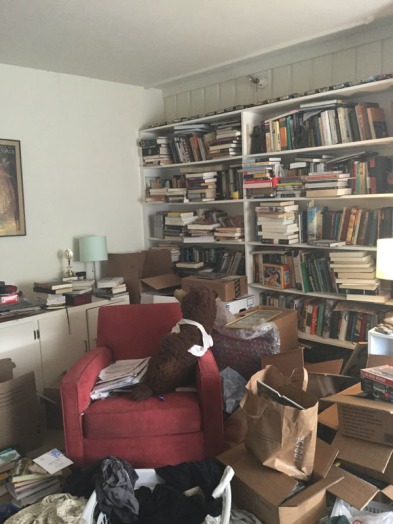 The initial email I received from the client’s wife (outreach was done with full consent her husband) included proposed needs and goals: help storing, sorting, and organizing books and getting them off the floor, having display space for a beloved model car collection, choosing new office furniture, replacing the old carpet, painting the walls, and fixing minor repairs. Most important of all: creating a space that would be enjoyable to work in. Attached was a photo of my first glimpse of the room.

Prior to our initial appointment, a few things had been moved around, but plenty was ready and waiting.

(Above: photo emailed to me. Below: panoramic I shot on day one.)

Before we touched a single object, the client described how he’d like his space to function along with the desire for the model cars currently lining the top of existing shelves to be more prominent. He restated the priority of having a clear floor while acknowledging the need to get rid of a lot of books. In order to achieve the former, the first step was triaging the latter.

In three hours filled with swift decisions, the 12 boxes and eight bags of books stacked up in the office-adjacent garage (photo below) were loaded into the client’s car. A drive to the Friends of the SF Public Library donation center happened after I left. He was going to continue working on the book purge without me.

I was asked about and provided referrals for custom bookshelves, a handyman, flooring, new furniture options, and ways to get rid of the unwanted furniture. A month later, I was invited back to meet with the client and a vendor I recommended for an in-home custom shelving consultation. After surveying an array of options that were drafted on the spot, a design was selected for adding new bookshelves to the bare wall perpendicular to the window as an extension of the existing built-in.

One little fun fact about this undertaking that’s worth a mention: the client was on the verge of leaving town for three months to teach on the other side of the country. Prior to departure, he packed the cars, culled more books, and began boxing books. While out of town, his wife was in charge of coordinating emptying the office, painting, carpet removal, and new floor installation. None of the existing furniture was coming back into the space. A fresher and lighter look was on the way. Bonus fun fact: The office project also inspired her to take on a spontaneous kitchen reorg!

He was back in town by early November, and I returned to see the first phase of the makeover. I walked into a fresh blank canvas complete with new paint, floor, and bookcase. What a far cry from that photo in my inbox over the summer! The task at hand was to re-house books into a functional library. Step one: sort by category. Step two: sort each category alphabetically by author. Step somewhere in the middle: occupy select shelves with cars.

We employed all horizontal spaces available – chairs, the floor, my stepladder, and a borrowed folding table – for the sorting process.

There was a commitment to keep the collection of books to an amount that fit on the built-in shelves. As the sorting occurred, so, too did another round of culling. Everything that stayed had to fit. Space was left for future acquisitions. Temporary placeholder signs designated what category went where. The vision was taking shape. 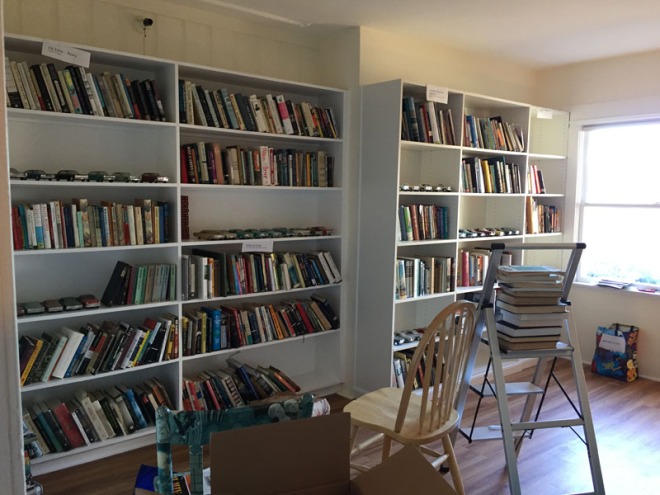 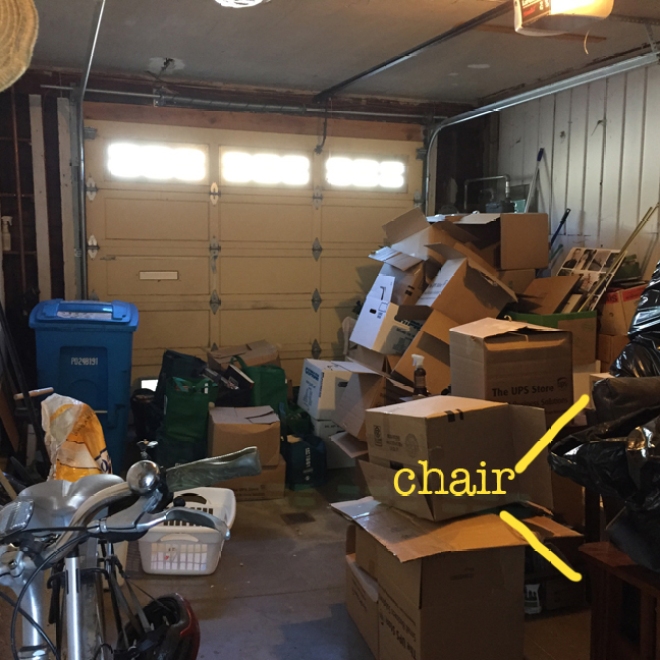 Once the books were moved in, furniture selection and acquisition was next. A comfortable chair for reading was on the list. I noticed a wood and leather Mission-style chair buried in the garage during the early triage days and asked if it could be an option. (The yellow lines point to the seat back and arm of the chair.) The chair didn’t fit in the main living spaces and had been relegated to the garage. He liked the thought of giving it a prominent new home.

The holiday season came and went and I returned early in the new year for the final “unveiling.” 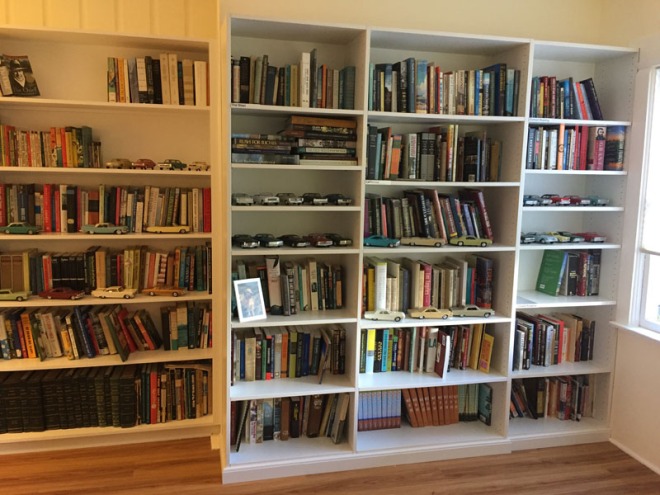 The client wanted the writing corner to be free of distractions. The white desk blends into the wall that was intentionally left blank.

Making sure the window and view to the garden were not obstructed was another consideration. The low-profile table originally desired for the printer was no longer available, so a decision was made to station it just inside the doorway of the office. When working upstairs, it’s easy for the client to print and retrieve the page/s by reaching into the office without having to traverse the room.

The chair that was rescued from the garage has a new lamp friend. Shine on!

The testimonial that followed:

“During a long career as a magazine writer and editor, I was notorious for having the messiest offices in the world. Both at work and at home, my workspaces were buried in books, papers, and the occasional forgotten coffee cup. Now, thanks to Debra Baida at Liberated Spaces, all that has changed. She took on the Herculean task of turning my nightmare home office into a workspace that would be efficient and serene, and she succeeded beyond my wildest dreams…Now I have the best office in the world.“