The start of a revolution

For starters, I haven’t started a revolution…yet! But this blog post is a bit revolutionary for me. This paragraph aside, the story you are about to read was penned by my partner, Sven, around a series of photographs I shot on a historic day in the sustainability movement. It was a foggy morning that found us on our way to Sacramento to pursue what we hoped would be our first true documentary collaboration. His recorder in hand, my cameras’ viewfinders taking turns at my eye, we’re happy to share the fruits of this creative jam session. The day was…

January 3, 2012: California becomes the sixth state to adopt law that allows the formation of corporations whose main purpose isn’t to make money.

A day at the Secretary of State’s office in Sacramento, where California’s first twelve businesses filed to operate as benefit corporations. 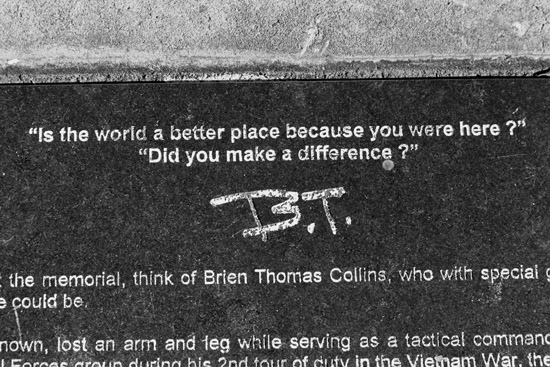 California Vietnam Veterans Memorial in Sacramento’s Capitol Park, only a short walk from the Secretary of State’s Corporate Filing Office, honoring Brien Thomas (B.T.) Collins, Vietnam War veteran and CA Assembly Member, who “never wavered in the belief that one should give something back to society.”

I hope five or ten years from now we’ll look back on this day and say “this was the start of a revolution, because the existing paradigm isn’t working anymore. This is the future.”

It was only a month ago when I first heard about the concept and existence of benefit corporations. My partner in creative eco-thinking, Debra Baida, had just come back from a Green Chamber of Commerce event at which Donald Simon, one of three attorneys instrumental in passing AB361, California’s new benefit corporation law, had explained the meaning and impact of this new legislation. 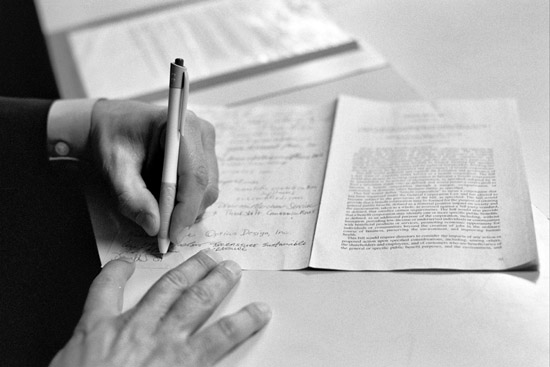 Sponsored by Assembly member Jared Huffman, this new bill would allow corporations to register as a Benefit Corp rather than an LLC or C Corp and drastically redefine the purpose of their existence, requiring consideration of non-financial interests when making decisions and being held legally accountable by third party standards to create a material positive impact on society and the environment. After Hawaii, Virginia, Maryland, Vermont, and New Jersey, California was poised to become the sixth state to write benefit corporations into law, and its legislation was the most far-reaching to date. There was going to be an inaugural filing of articles of amendment by leading California sustainable businesses for the first effective date of benefit corporation legislation, on January 3rd.

Being a supporter of the Occupy movement and a lifelong advocate of the concept of an ecological economy as the only viable path toward any kind of sustainable future of living creatures — including homo sapiens — on planet Earth, the only questions I had were:

“Why haven’t I heard about this before?”

“Why is nobody talking about this?”

After a bit of back and forth on whether our presence at this historic event could be meaningful enough to justify the SF to Sacramento round-trip by car, we finally decided that yes, spreading the word about this event had the potential to outweigh the carbon footprint of our trip. We set the alarm for 6am, Deb packed her old Nikons, I grabbed notebook, pen and field recorder, and off we went to document the big happening in our state’s capital.

We got to the Secretary’s office a bit early and were immediately greeted by B Lab‘s Heather Van Dusen, who told us that everyone was hanging out in a cafe across the street. (B Lab is a nonprofit organization that has been certifying non-legally bound B Corporations, and it is one of the third party standards available to Benefit Corporations. See B-Corp vs Benefit Corp). The atmosphere inside the cafe was electric, like the scene from a schoolyard the morning before a field trip, only with suits and cameras. Two of the three attorney musketeers, Jonathan Storper and John Montgomery, were discussing last minute details, while Ari Maslow of Terrassure Sustainable Land & Resource Development, one of the twelve corporations about to step over to the side of light, was collecting snapshots for his Benefit Corp family album. 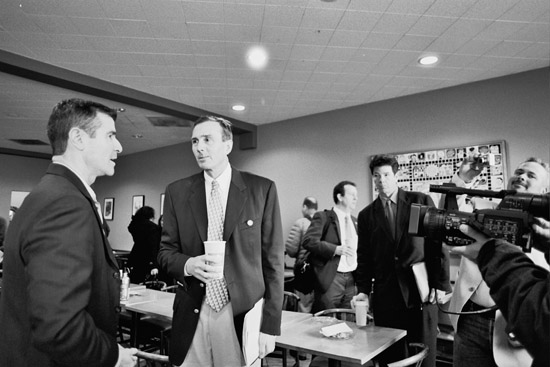 We quickly realized that this was more like a reunion than a corporate boardroom affair, with cheers, chatter and laughter reverberating across the room. Dermot Hikisch, Director of Business Development at B-Lab, told us that a lot of the folks who were going to sign papers to operate as benefit corporations had been certified B-Corporations since it had become an option in California in 2007. And they were more than happy to share their experience with us.

“B-Corps are all about interdependence, so we all work together,” said Stefan Pellegrini, principal at Opticos, an architectural firm that focuses a lot of its work in rural, under-served communities that traditionally fall below the radar of planning. “The whole thing operates from the viewpoint of sharing resources and encouraging other businesses as much as possible,” added Rose Yee, Co-Founder of Green Retirement Plans, Inc., whose business is built upon environmental stewardship, social responsibility, and community commitment. “We’re always trying to recruit more B-Corps and get them the full benefit status,” explained her husband and Chief Retirement Specialist, Timothy. “If there’s anything we can do to help in other states we’re happy to.”

Stefan was in the middle of explaining to me how Opticos was improving infrastructure in impoverished Central Valley minority communities through grant-funded planning, when Heather interrupted the lively discussions all around with a call to head across the street, followed by a much applauded “Let’s make history!” 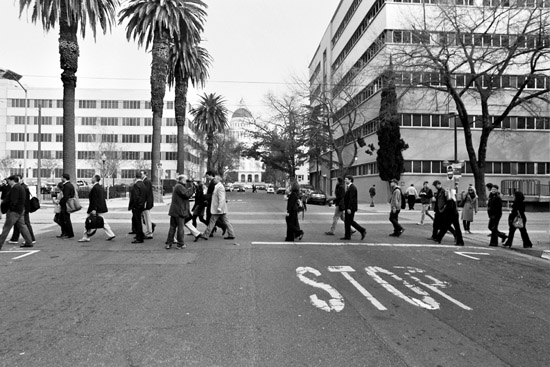 When we got to the front of the Secretary’s office, it was quite a joyous mob scene. Of course, Assembly member Huffman (left) and Patagonia Founder Yvon Chouinard (middle), greeted by B Lab’s co-founder Jay Coen Gilbert (right), were the main attractions. 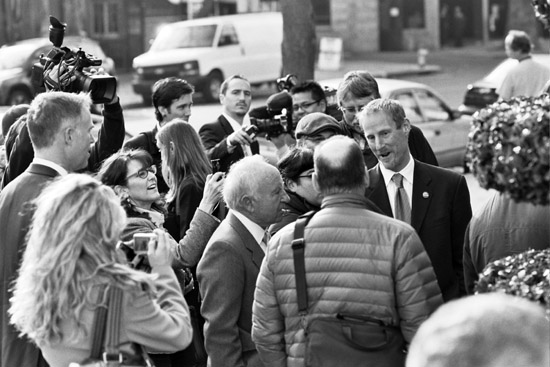 Donald Simon, the buoyant champion of Benefit Corporations who had warded off a whole battalion of detractors and naysayers for eight years, was luminous as he was handing out signing papers (followed by a hug) to each company’s representative. 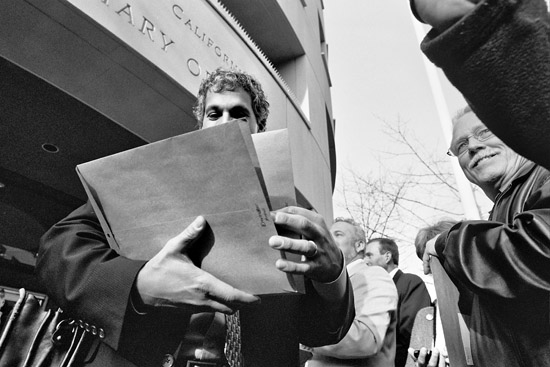 You could tell these people had gone through a lot of blood, sweat and tears to get here, and the speeches that followed made clear not just how much of a struggle it is to get anything of any forward-thinking significance passed through a largely anemic legislative process, but what a breakthrough the fact that they did was.

Jay Coen Gilbert said that AB361 would redefine the meaning of business from competing to be the best in the world to be the best for the world. Jared Huffman talked about the possibility and promise of this legislation to give investors a way to put their money to work for a better future and consumers new choices. Gary Gerber, CEO of the oldest solar installer in the country, Sunlight & Power, and strong believer that a corporation can have sustainability in its core values, recounted how he immediately jumped on the idea when he heard that it could be made into law. Mike Hannigan, the co-founder of Give Something Back Office Supplies, who has been in business for more than 20 years, pointed out that AB361 would allow entrepreneurs to scale socially responsible principles to a previously unimaginable level.

And then of course there was the star of the day, Patagonia’s Yvon Chouinard, the reluctant business man whose little company has been around the block since 1956, who said he felt like a farmer who spent all his life building up his farm, but instead of having it turned into a housing development after he’s gone, Benefit Corp would now allow his company’s values to continue. 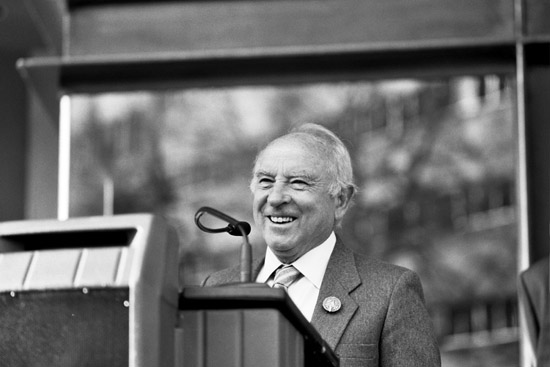 To understand just how much of a subversively brilliant change maker this man is, consider Patagonia’s recent Black Friday Don’t Buy This Jacket ad in the New York Times.

Next up, the whole strange procession stormed the building, armed with envelopes and file folders, headed for the Corporate Filing Office on the third floor. 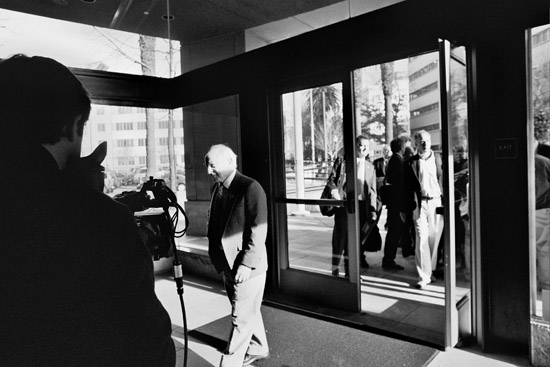 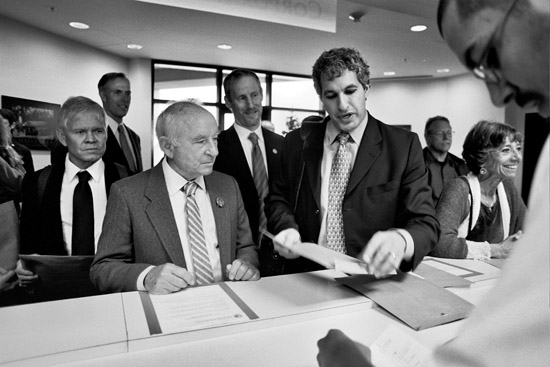 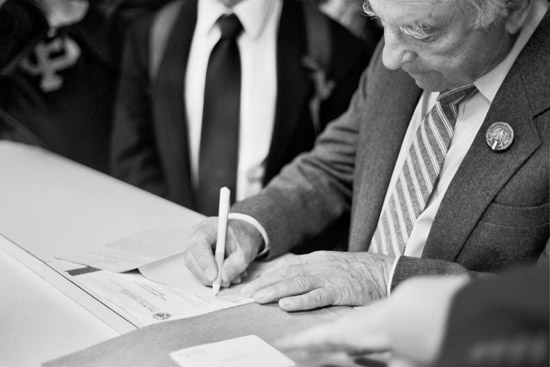 Anyone else? Sure thing. Carolyn McMaster, co-founder and principal of Thinkshift Communications, signs on, joined by Mike Hannigan, Gary Gerber, and Solar Works VP Laura Goldman. 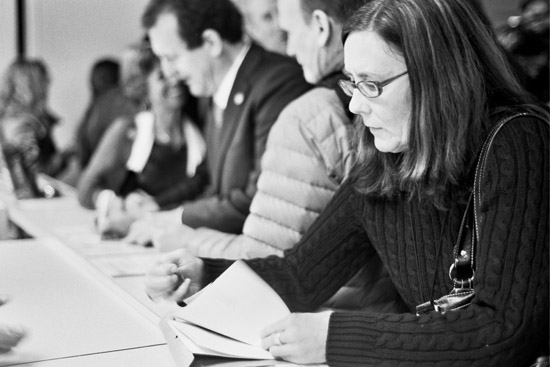 To say the clerks at the corporate filing office were surprised is an understatement. They had never seen anything like it, and you could tell they were having a blast, in a low-key, clerkish sort of way. And of course our intrepid photographer, who had bolted ahead of the pack and boldly jumped over the counter to capture the whole crazy scene unfolding, was cracking jokes with the public servants between shots. 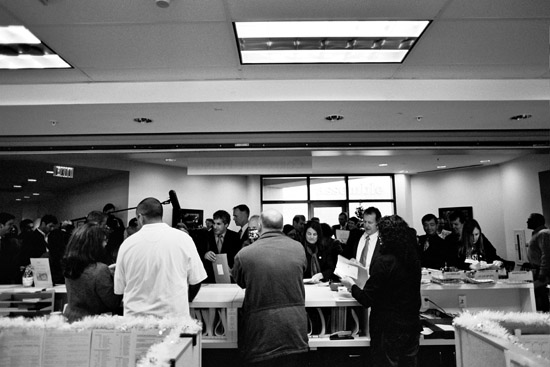 “Hey look, we did it!” Newly minted benefit corporation officers Timothy and Rosi Yee show their “papers.” And in case your were wondering, reusable mugs are just part of a Benefit Corp Executive’s standard attire. 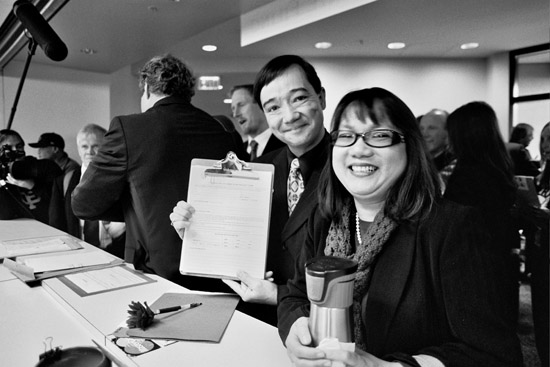 To mark the historic moment, everyone signed a copy of AB361. 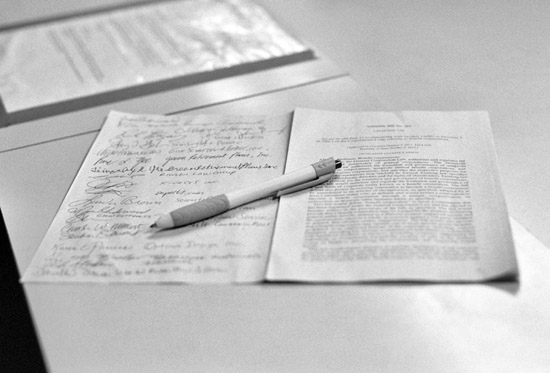 Power to (the corporations that work for) the People! 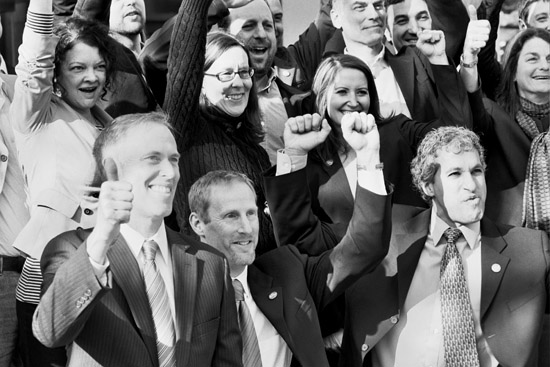 And here they all were: The pioneers of an idea whose time has come, and that with all of our support might soon be the normal way of doing business across the U.S. and beyond. 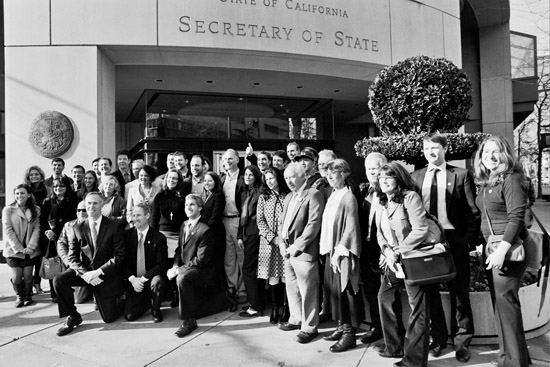 So where to go from here? Well, first the whole crew reconvened for Mexican food and Margaritas across the street. Deb and I sat at a table with B-Lab‘s Andy Fyfe, Dopehut‘s Felix Cheung, Opticos‘s Daniel Parolek, and Loudsauce‘s Colin Mutchler, remarking how far we have come, but also how much more work still lies ahead. Everyone agreed that for the benefit corporation designation to have a more large-scale impact, many more companies, especially bigger ones and those that aren’t already guided by a triple bottom line philosophy need to come on board. Toward that end, B Corp legislation currently pending in New York, Colorado, Michigan, Pennsylvania, North Carolina, and Washington, DC could all use lots of attention and support, as each new passage will open the door just a bit more for a broader movement.

As Timothy Yee had pointed out to me earlier, it’s a bit tougher for large existing companies ingrained in traditional corporate practices to sign on, since you need shareholder approval. That’s why the authors of the B Corp legislation also included a less restrictive option, the Flexible Purpose Corporation, or FlexC, allowing companies to pursue social and environmental welfare objectives without liability to directors for not maximizing profit. Another choice available in some states is the L3C low-profit limited-liability company, a taxed organization that places social goals above profit.

For Deb and I, there was no escaping some of the realities of American life and politics as soon as we got back on I-80. Changing the paradigm on how we live on this planet and plan to keep it livable for generations to come is not just a matter of legislation, but a matter of the imagination and collaboration on a large scale. However, not everyone thinks change is needed. 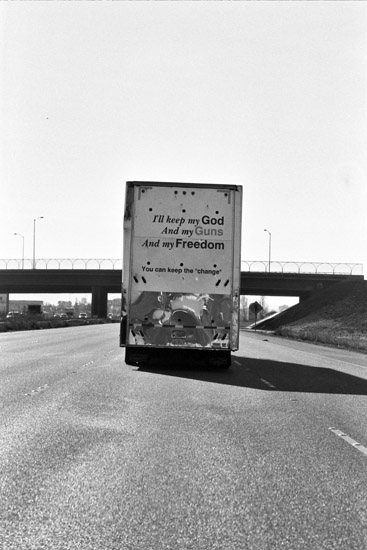 There was also the reminder that while every small step is important and counts, we are collectively still so enmeshed in a 20th century fossil-fueled… 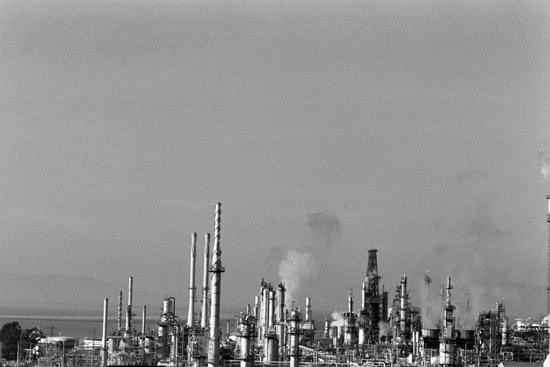 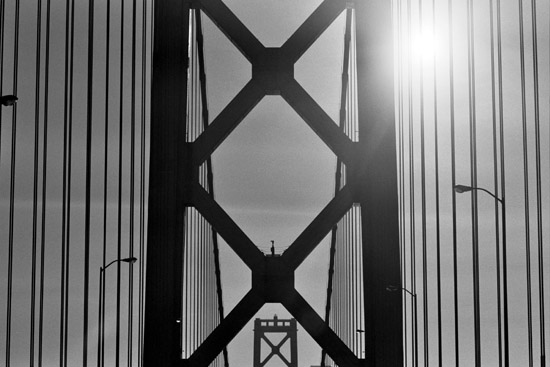 and consumerist way of life… 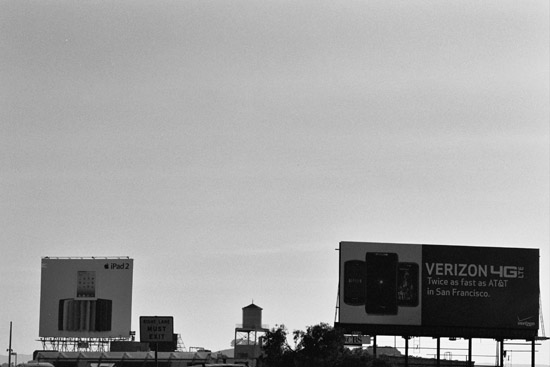 that any honest vision for a sustainable future must entail two words, seemingly irreconcilable to western industrial thinking, in the same sentence: Degrowth Economy.

So, we arrived back home overcome by life’s mystifying yet strangely inspiring paradoxes that line the path toward a sustainable future:

To think big we have to honor the small, 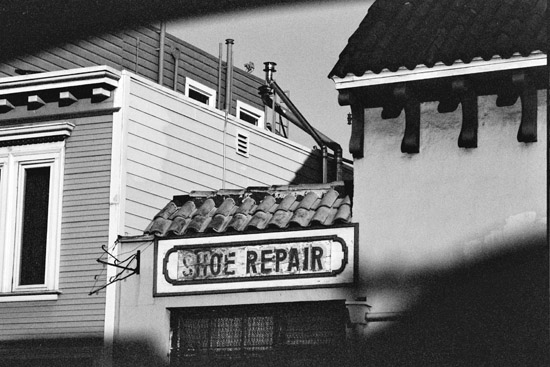 to move forward we have to slow down, 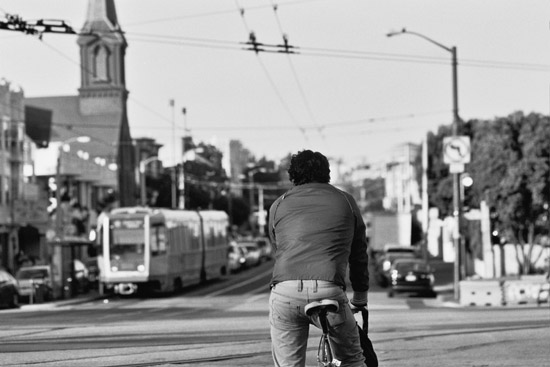 and to hold on we have to let go.

cross-posted at Daily Kos & A World of Words