The spargel of my eye 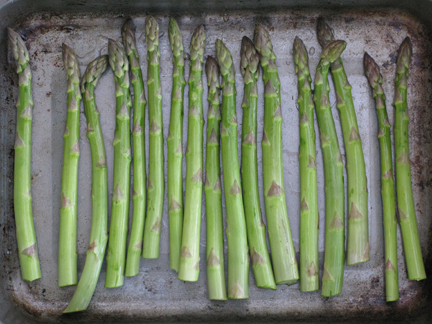 Asparagus spears chat amongst themselves prior to meeting some heat in my kitchen.

Springtime. The bright and transitional season typically signified by blooms and allergies going crazy, weather turning warmer, and strawberries and asparagus bringing audible oohs and ahhs at the farmers’ markets.  This spring started like any other, until my unintentional asparagus fascination took root.

The first signs began when I realized last month’s visit to southern Germany could possibly bring me face to face with the famous spargel, or white asparagus.

I first learned about spargel during a visit to Germany with my partner, Sven, four years ago. We were in downtown  Schwetzingen one morning and walked by the spargel statue: a life-sized bronze sculpture of a woman sorting spargel on a table. To the uninformed visitor, it’s seemingly mundane subject matter as monument doesn’t mean much, until you learn that Schwetzingen is the self-proclaimed asparagus capital of the world. The annual harvest of  spargel is a celebration of celebrations. Then and there, I added it to my unofficial (as in mental, not written) list of things to do and experience.

Our spring 2010 trip did not have us paying a visit to Schwetzingen, but I had hoped that in the four days leading up to our departure for Spain that I could see and taste this delicacy in its native habitat. There loomed the possibility that the elements would conspire against me. The winter had been harsh, and spring was unseasonably cool thus far.

During a coffee/tea stop after visiting the Ulmer Münster the morning after we arrived, we saw some spargel displayed on ice outside a local market in Ulm. There they were, the (sort of) mythical sprouts. We didn’t need to buy any. We were en route to Sven’s mother’s house down south, and we heard she was cooking up some spargel with dinner that night. (They were delicious!) 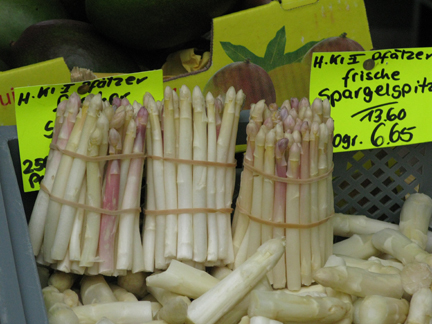 My first spargel sighting in Ülm had me overjoyed. Thin and pudgy varieties!

Spargel on ice. Very nice! (And very surreal looking, too.)

Spargel season was fully under way after I returned home, so in my absence, Sven, took this picture of spargel at a farmer's market. Three beautiful (and tasty) colors to choose from!

But before I returned to San Francisco, the asparagus radar continued to permeate our travels. We never made it to Spain. Due to Icelandic volcanic ashus interruptus, our flight was cancelled and it would be at least a week until we could re-book. Making the most of the situation and resources at hand, we hopped in the car and drove in the direction opposite the ash cloud. Hello, northern Italy!

And whether on pizza with speck, mixed with other spring vegggies, or in a divine risotto (see below), asparagus continued to sprout up along our journey. 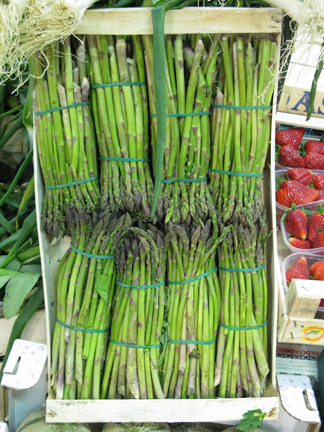 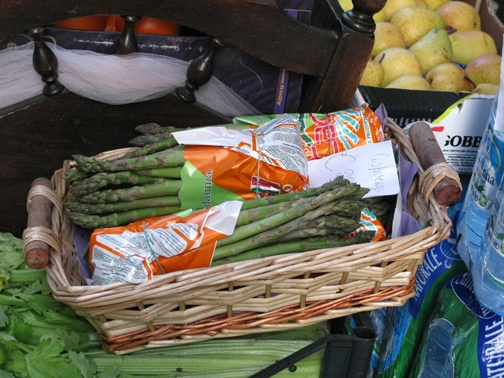 Asparagi in a basket, Asti.

I’ve been told that this fine delicacy is now available in grocery stores in the U.S., like a local Safeway, in San Francisco. Okay, so that’s rather surreal and surprising. I wonder if it’s imported…

Spargel. I’ve been there, I’ve done that. I can cross it off the list. What’s next?